During the bicycle craze that was sweeping the world in the 1880s-1890s, army leaders in several European nations, including Great Britain, Germany, and France, began experimenting with the military potential that these wheeled vehicles might have. In 1892, members of the Connecticut National Guard First Signal Corps began using bicycles as a means of transmitting information that was faster than walking and less expensive than using a horse. In 1895, a young Second Lieutenant by the name of James L. Moss, assigned to the Twenty-fifth U.S. Infantry Regiment, an all-black unit with white officers that was stationed at Fort Missoula, Montana.  Moss, a bicycle enthusiast himself, received permission from the head of the U.S. Army to organize the Twenty-fifth Infantry Bicycle Corps, the first unit of its kind in the country, to test the practicality of the bicycle for military use in mountainous terrain. Moss hoped to demonstrate that cycling could be an effective way to move troops, send dispatches, and conduct reconnaissance--especially foot soldiers who often had no access to horses. Moss never believed that the bicycle would ever, or could ever, replace the horse. Instead, he argued that the bicycle and the horse each had specific advantages and that a modern, up-to-date army should have both.​

Lt. Moss was allowed to establish the Bicycle Corps with the understanding that the bicycles would have to be provided to the Army at no charge. Moss contacted A.G. Spalding & Co. of Chicopee Falls, Massachusetts and its owner, in the hope of securing a lucrative government contract, agreed to those terms and supplied the specially modified Spalding bicycles for the Bicycle Corps’ use.

The Bicycle Corps made its first major excursion in 1896, when Lt. Moss and eight men departed from Fort Missoula on a 24-day, 791-mile trek from Fort Missoula to Yellowstone National Park and back. The wheels of the1896 Spaldings, with their wooden rims, proved to be particularly prone to damage, both from water and by the pounding the bikes received when the Corps was forced to ride over railroad ties when roads were impassable.

In 1897, Lt. Moss embarked on a more ambitious journey: a trip from Fort Missoula to St. Louis, Missouri, a one-way trek of 1,900 miles that would take 41 days to complete. (The men returned to Montana by train.) The size of the Bicycle Corps had been expanded to twenty-two men, all of whom would be riding redesigned Spalding bicycles, which at the suggestion of Lt. Moss, had been fitted with steel rims and fully enclosed chain cases. All the bicycles used by the Buffalo Soldiers were returned to the company upon completion of the experiments, and today no original military Spalding is known to have survived.

The bicycle pictured here is my attempt to replicate the bicycle that was used by Lt. Moss and his men on their trip to Yellowstone in 1896. My bike is an 1895/96 Crescent, made by Western Wheel Works, and for all intents and purposes it is a dead ringer for an 1896 Spalding. Features include a leather frame case specially made by my friends Steve Stangl and Stanley Bonjour. Strapped to the handlebars is a bedroll with a shelter half tent and poles, and an 1894 bugle that I have owned for many years (I swapped a set of poker chips for it when I was ten or eleven years of age). A tin drinking cup is strapped beneath the saddle for easy access.

If you are interested in learning more about the Twenty-fifth Infantry Bicycle Corps, I recommend the following: George Niels Sorensen, Iron Riders: Story of the 1890s Fort Missoula Buffalo Soldiers Bicycle Corps, 2000; and Wes Hardin, Wheeling Through Yellowstone: A History of Early Bicycling in America’s First National Park,” Montana The Magazine of Western History, Vol. 64, No. 1, Spring 2014.
NOTE: In the 1890s, members of the Twenty-fifth Infantry would not have been referred to as “Buffalo Soldiers.” That term was first given to black troopers of the black U.S. Tenth Cavalry by Cheyenne warriors out of respect for their fighting ability. Although “buffalo soldier” has since become a generic term to describe any African American soldier serving in the West, the members of the Twenty-fifth Infantry at Fort Missoula were referred to as “colored soldiers” or “colored regulars.” 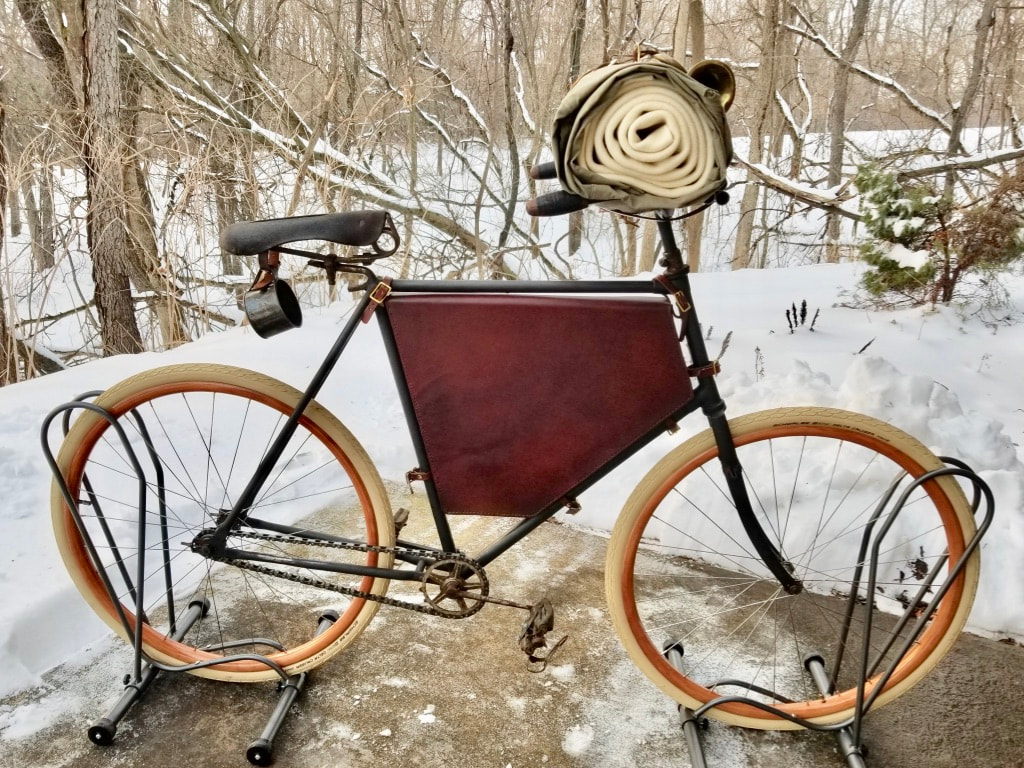 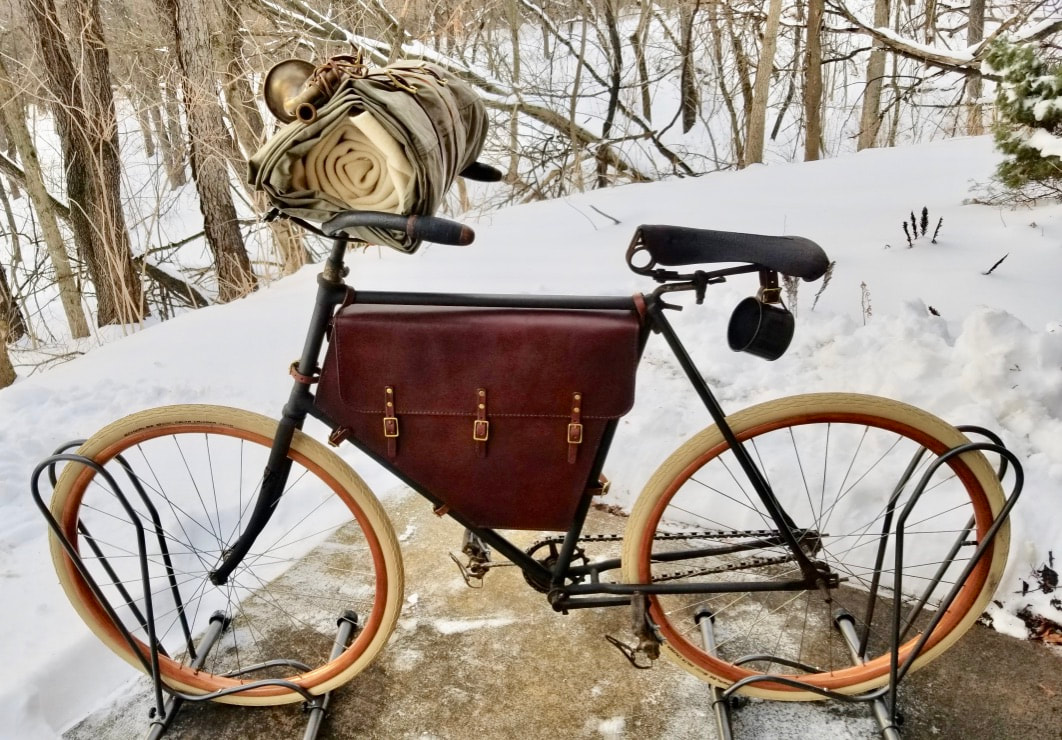 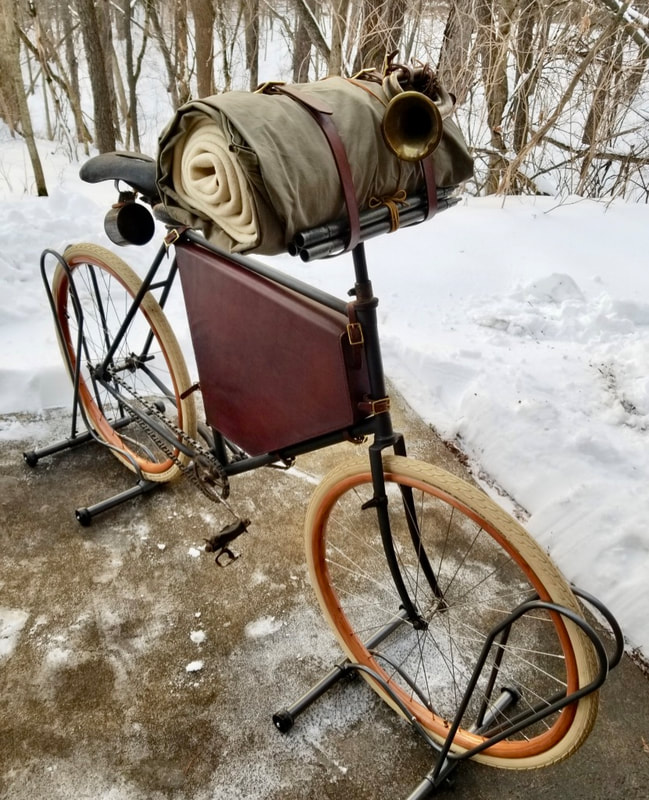 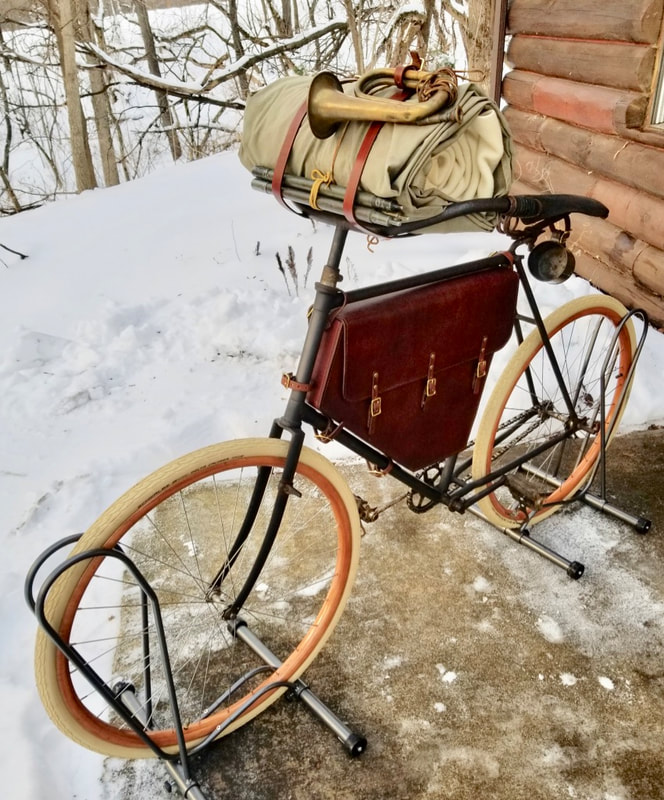 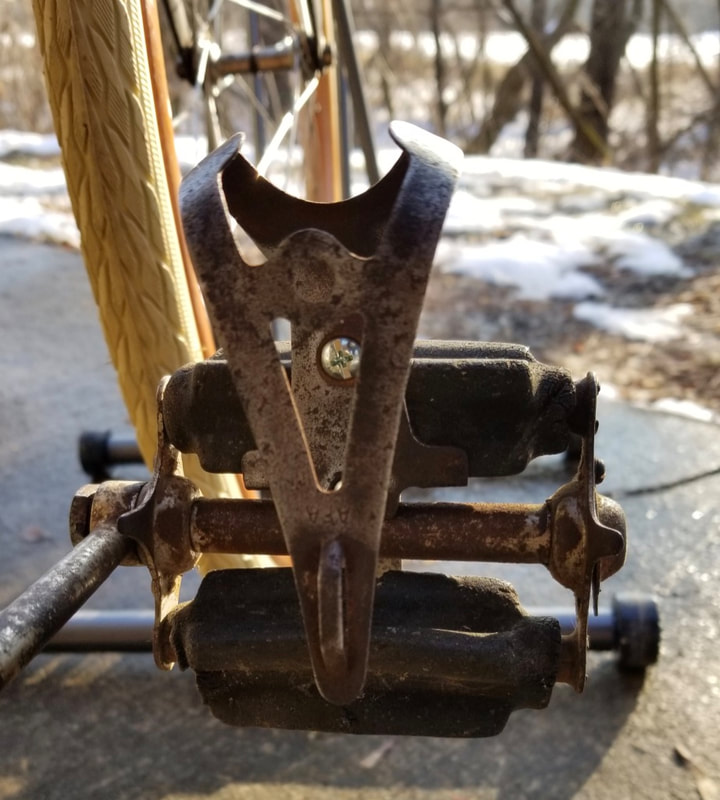 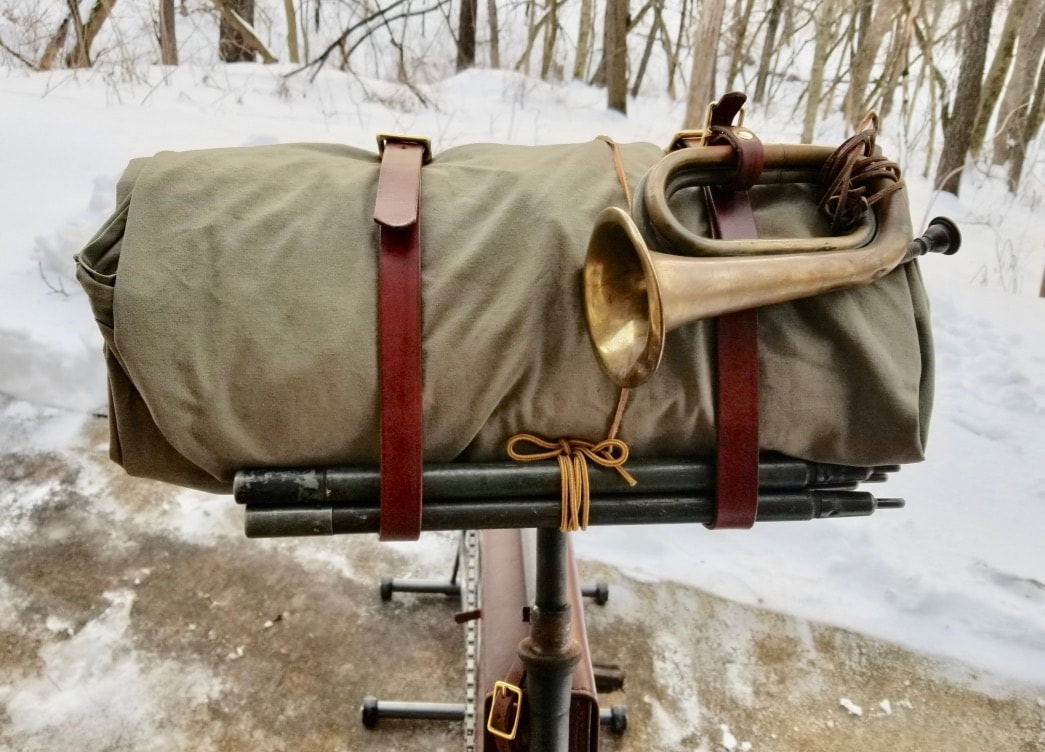 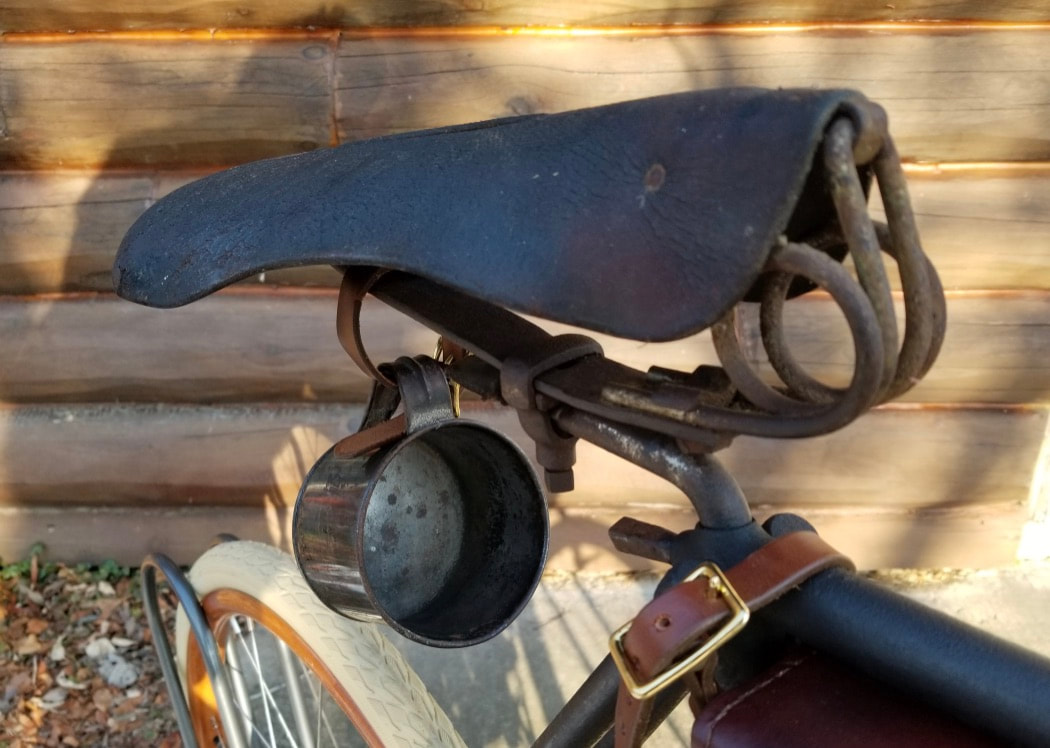 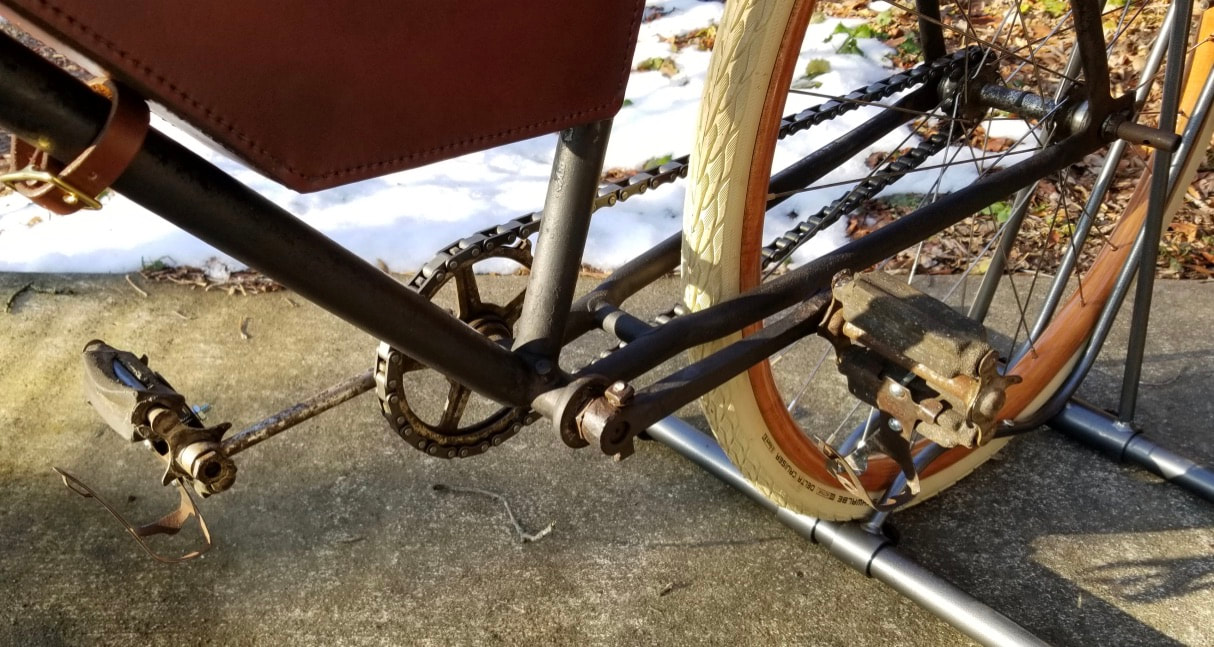 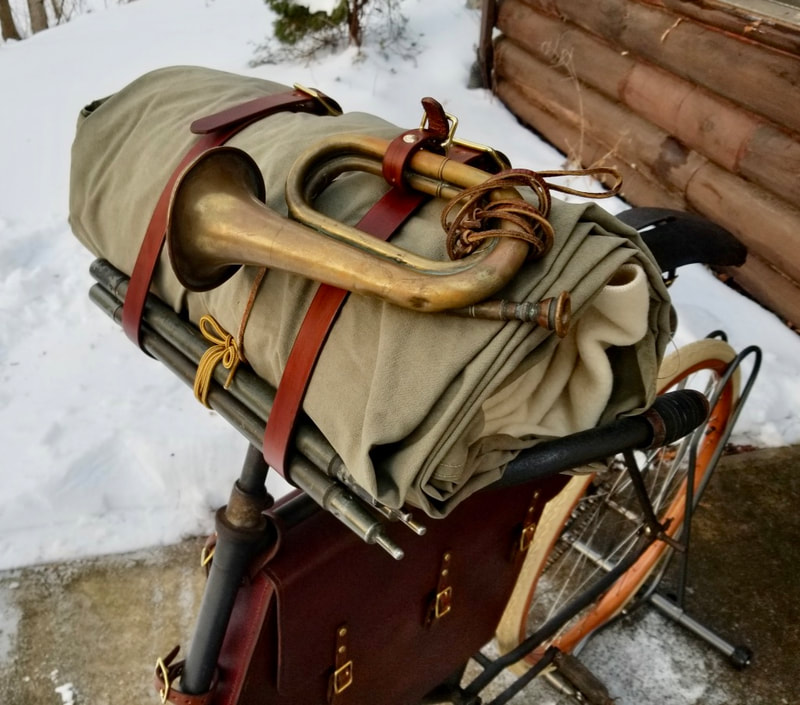 Equipment Carried by the Buffalo Soldiers 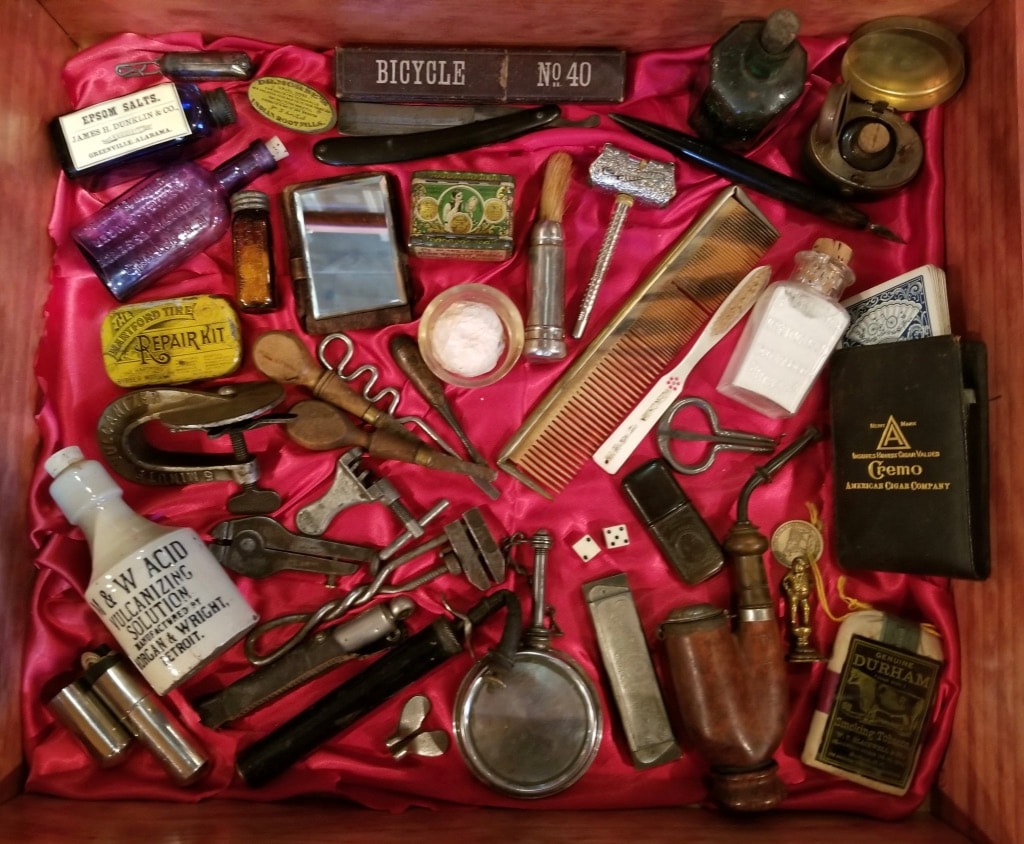 ​Fully loaded each bicycle carried fifty-nine pounds of gear, "a rolling anvil," as described by a contemporary writer. In the display case pictured above I have assembled a few of the "necessaries" carried by Lt. Moss and the buffalo soldier in the frame case and/or the haversack attached to the front of the bike.

Top left:
Camphor pills
Jamaica Ginger
Epsom Salts
Quinine pills
Indian Root Pills (In the late 1890's many if not most disease was attributed to "impurities of the blood"