​Many years ago Charlie Dixon and I were standing in the big showroom where the high-end Harley-Davidson, Indian, BMW, and other rare motorcycles were on display at the world famous motorcycle swap meet in Davenport, Iowa. Every Labor Day weekend for as long as I can remember thousands of motorcycle enthusiasts descend upon Davenport from all over the world. Charlie and I were gazing at row after row of spectacular motorcycles, many of which are worth tens of thousands of dollars, when a diminutive "motor bicycle" caught our eye (And we weren't alone. This little red bike was drawing more attention from the spectators than the big dollar motorcycles). It was a teens or twenties era Iver Johnson bicycle, skillfully transformed into a board track racer.

The builder had added a Whizzer engine, and fashioned a gas tank out of the old tool box that hangs under the top tube. Charlie and I stood slack-jawed at this little wonder, our respective light bulbs going off simultaneously. We knew immediately that we had to build one of these motor bicycles for ourselves. (In my case, this would mean finding a bike and the correct parts and asking Charlie to build it for me).

I chose a 1920's CCM (Canadian Cycle & Motor Co.) camel-back bicycle that I had acquired from my Canadian friend Real Le Bel some years earlier. It already came with a suspension front fork, and the frame design would lend itself well to the motor-bicycle conversion. We mounted a first-generation early nineties round head Chinese engine, a copy of an earlier Russian "D4." My friend Keith Gaber found a brass pipe in the junk yard that would serve as a gas tank (I had Charlie cut the top off of an 1890's brass traveling inkwell to make the gas cap). Keith also made the silver spoon-handle bracket for the rear reflector. Charlie went to work and antiqued every inch of my CCM. He was so successful that at first glance a lot of diehard vintage motorcycle enthusiasts think it a stock machine. Note the brass magneto and sprocket covers, and the open-face clutch cover. I've had some serious fun riding my CCM with Charlie down the Missouri back roads, "wringing the handlebar for speed," as James Dickey might say, "Wild to be wreckage forever." 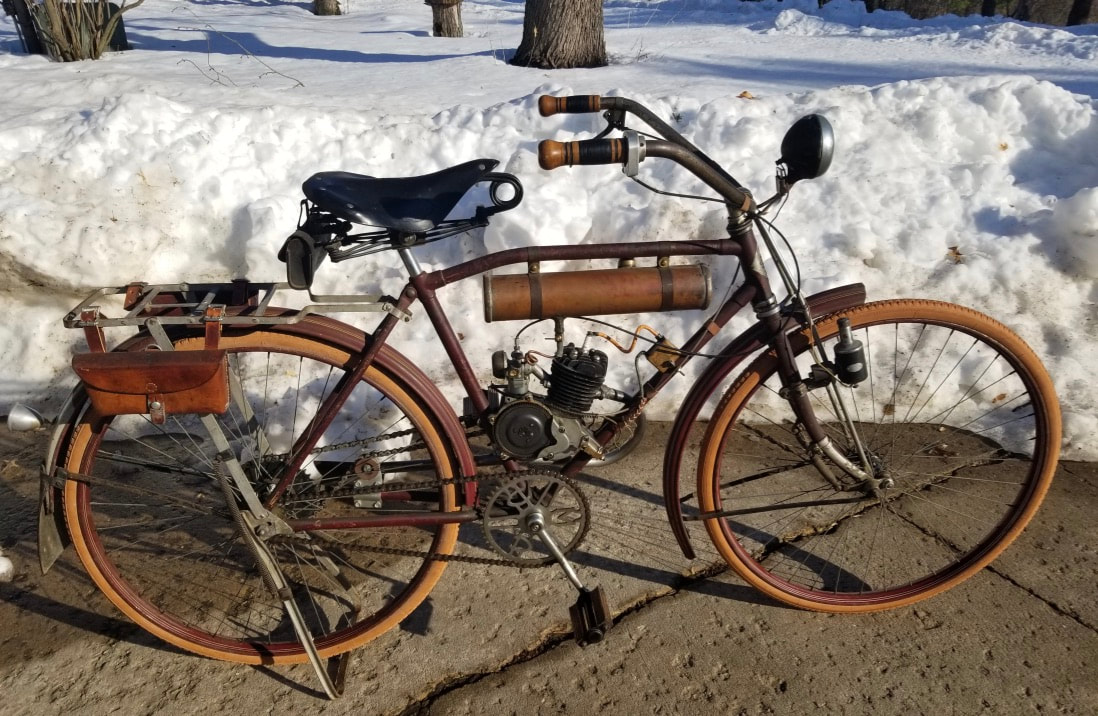 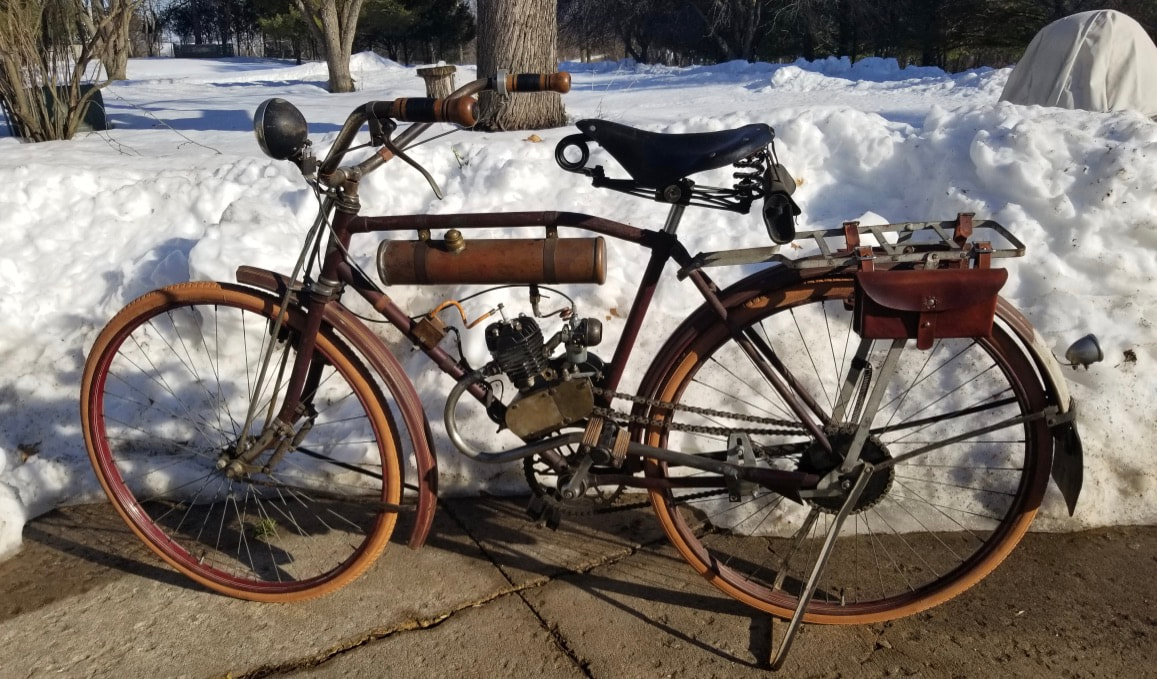 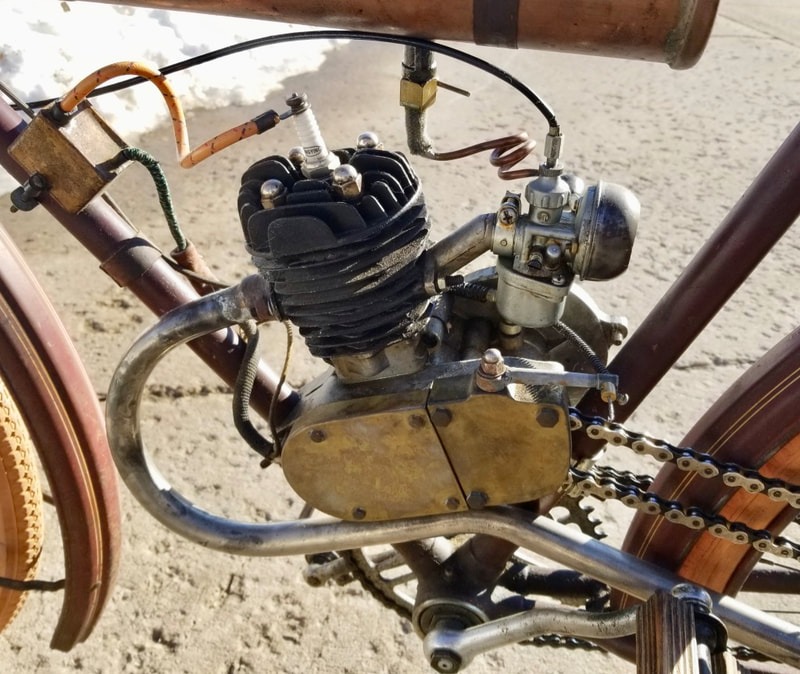 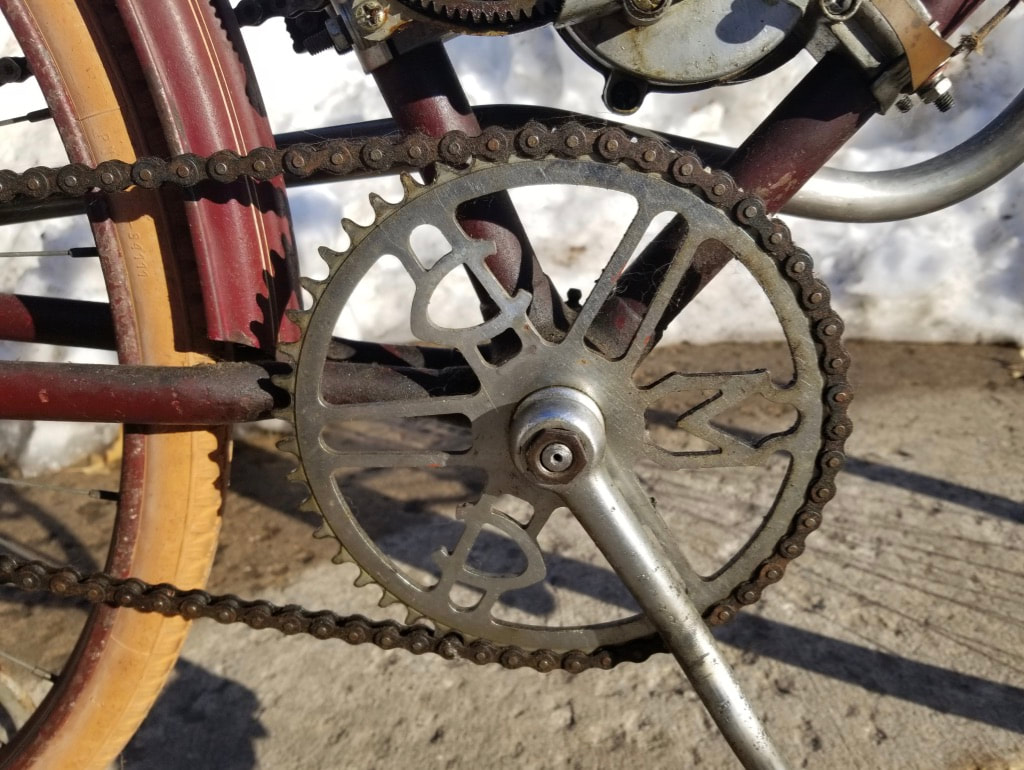 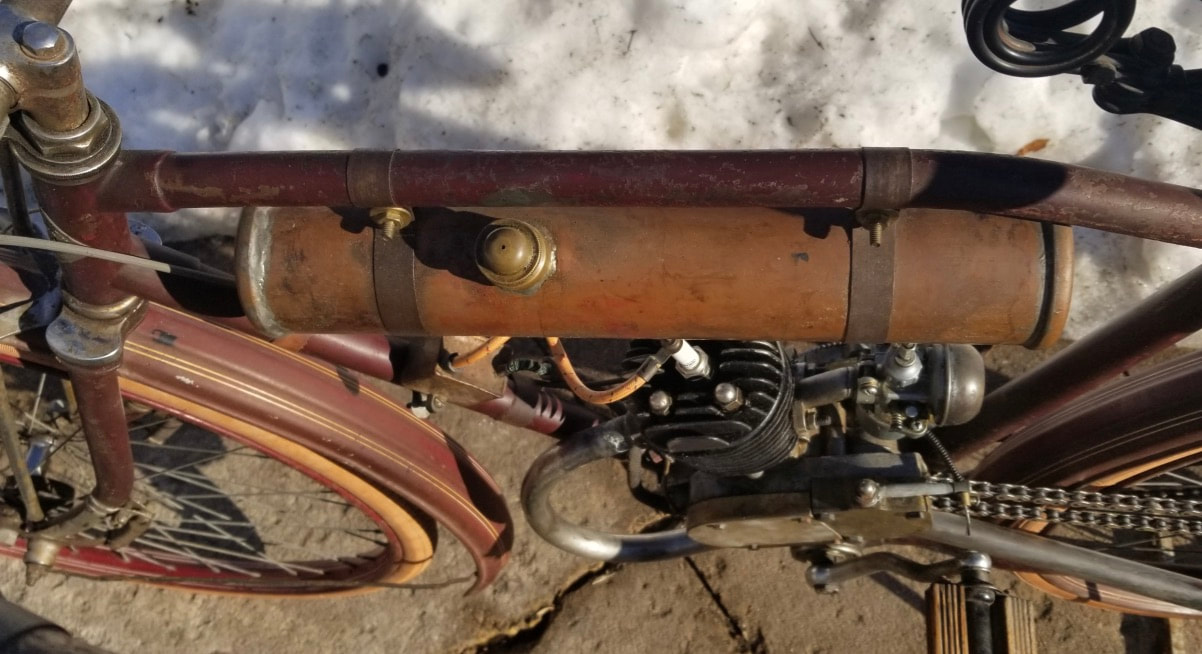 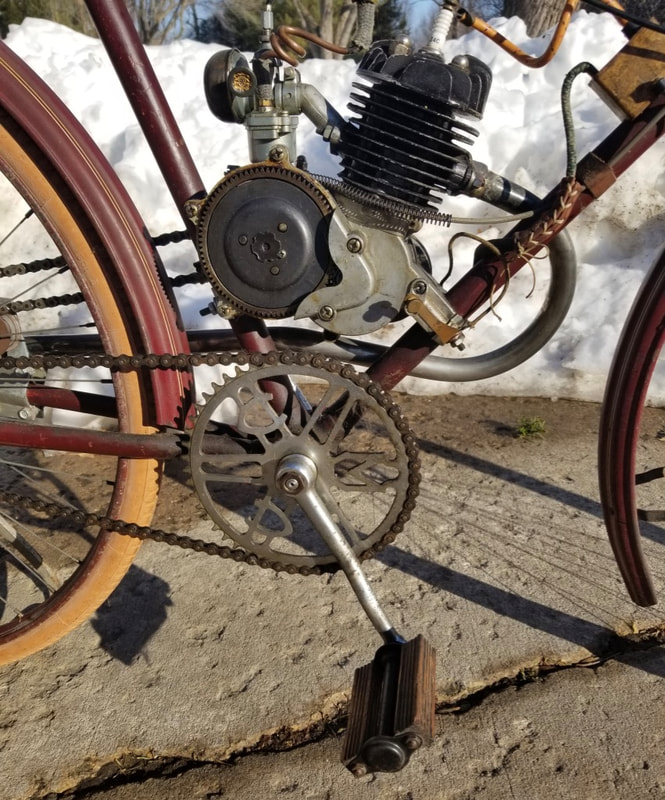 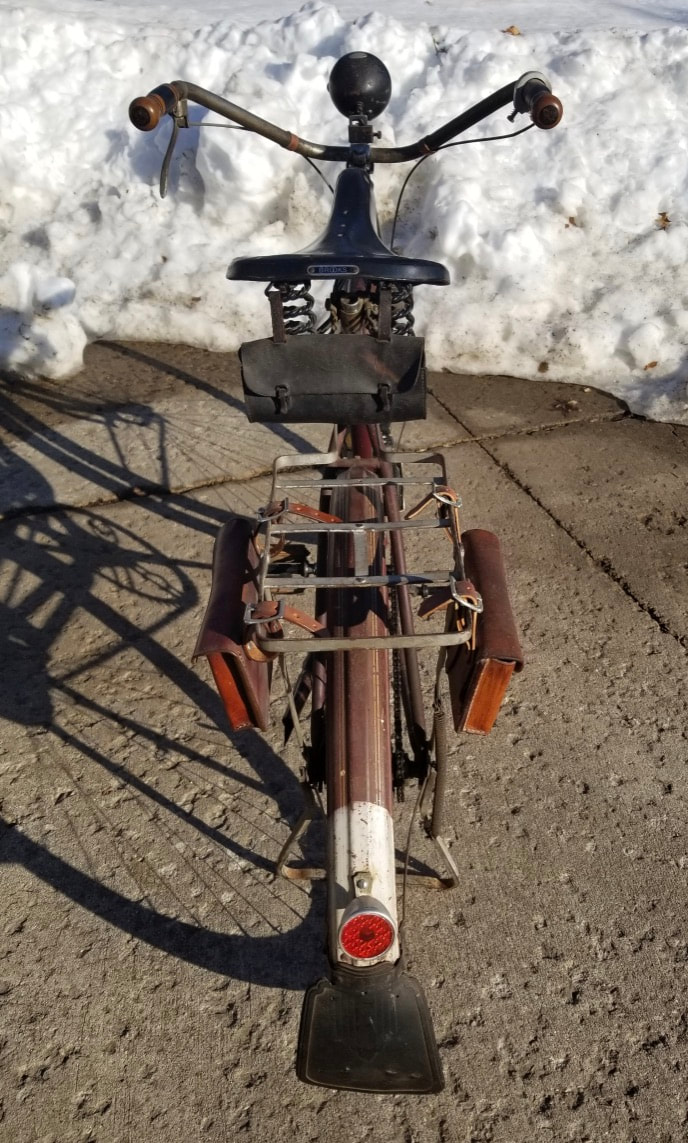 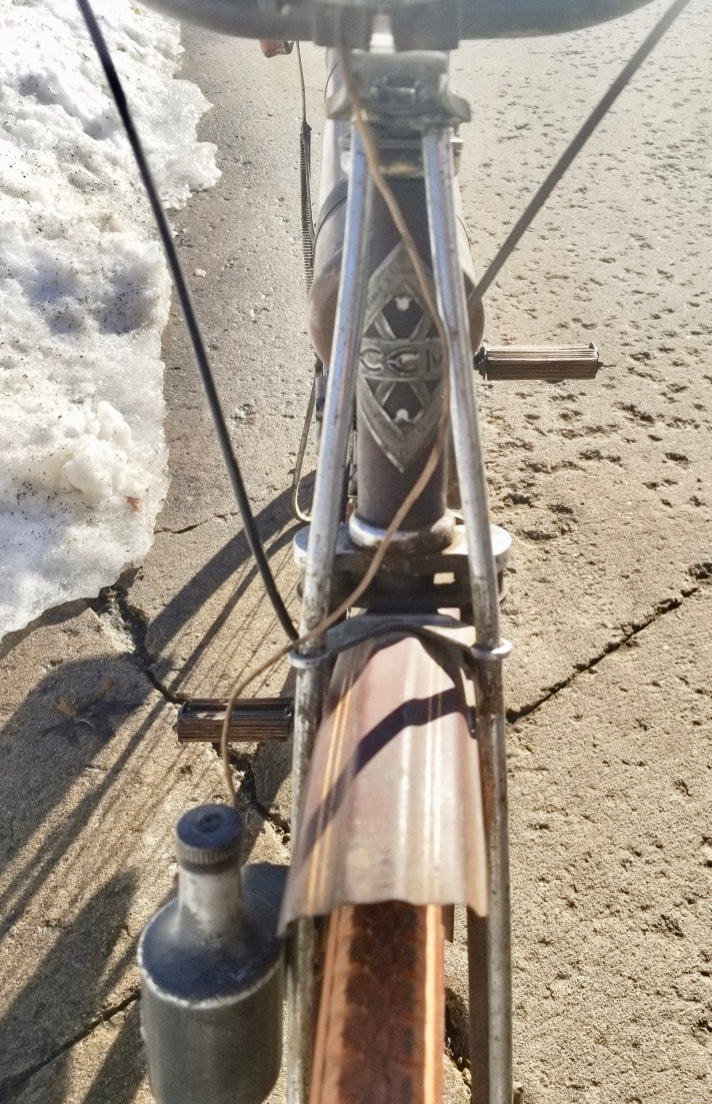 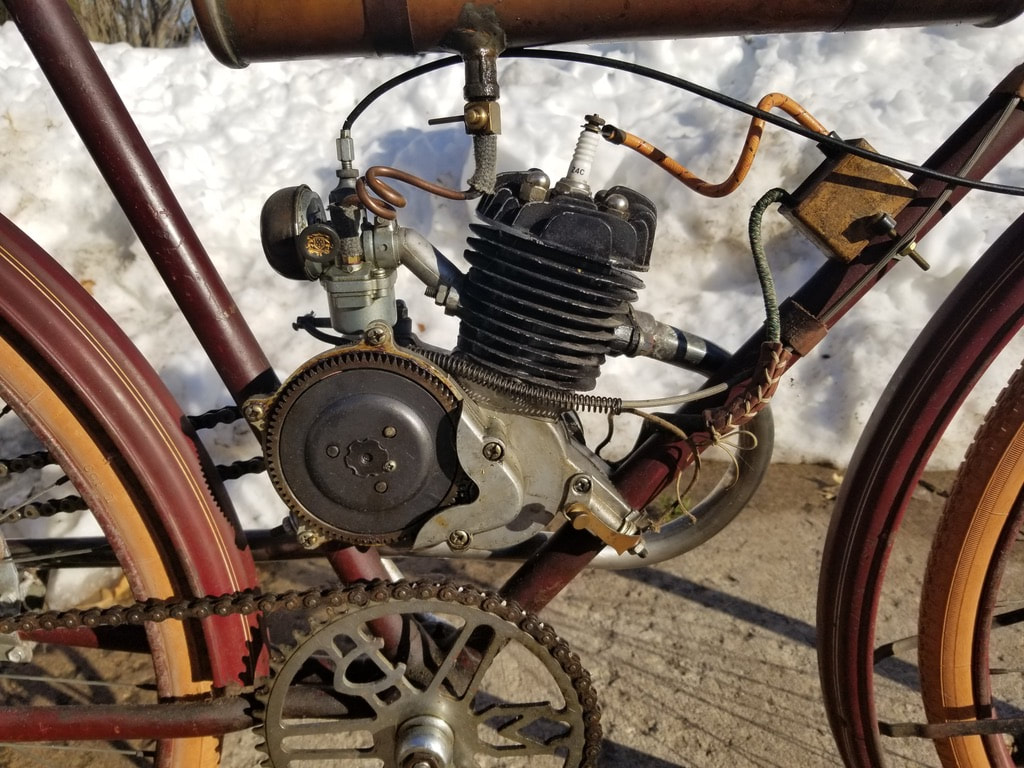 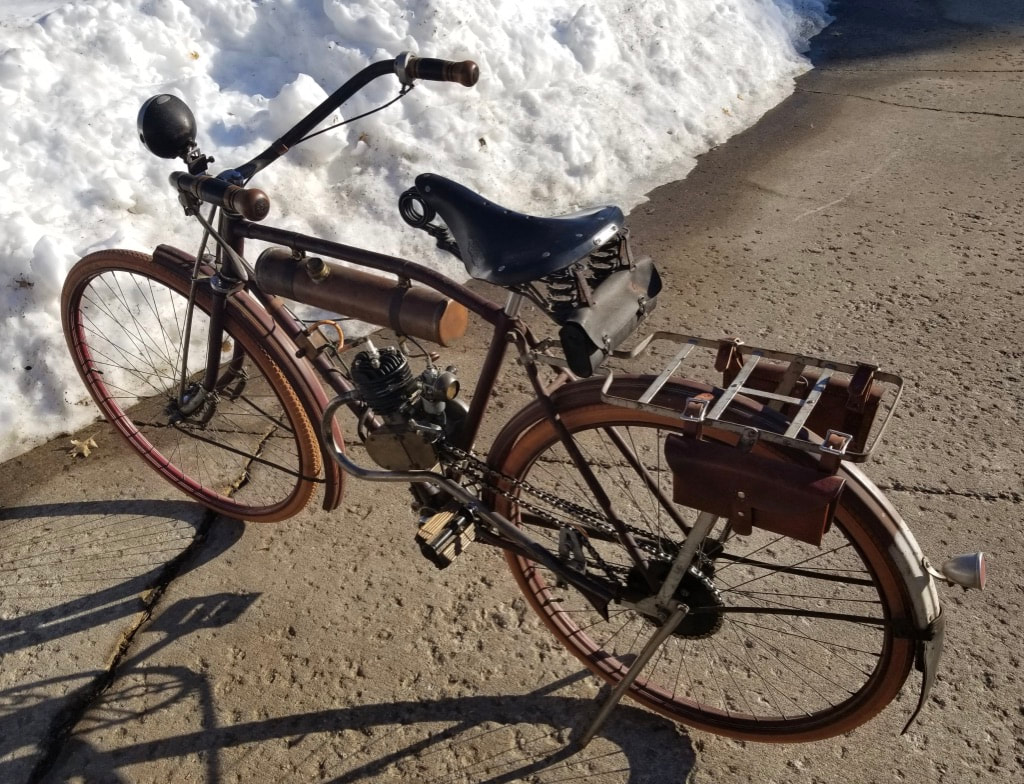 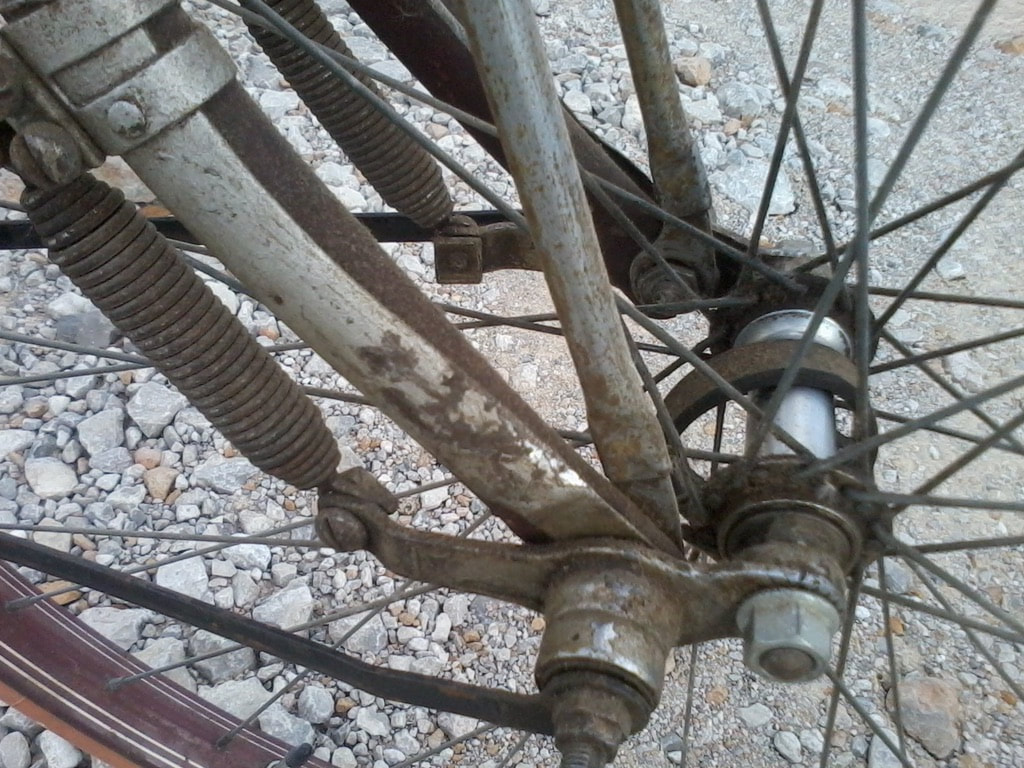