While teaching at a community college in Iowa during the mid-nineties it was my good fortune to have as an office mate a crusty but lovable old Brit by the name of Peter Franklin-White. A former dancer in the Royal Ballet of London, Peter and I were often the odd men out among the technical-minded faculty and students. To entertain one another, we shared stories. Peter knew of my love of bicycles, and provided the bicycles you see here with a story of great importance.
Peter Franklin-White was a boy during World War II, and vividly recalled for me the bombing of London by the Germans, commonly referred to as "The Blitz": fifty-seven nights of bombing beginning on September 7, 1940. He told me he would often see his fellow countrymen and women being pulled from the rubble, some living, some dead. He remembered the shrill cry of the sirens, the deafening explosions, and fires raging throughout the city. Through this chaos he would ride a rod-brake bicycle similar to the ones you see here. He claimed that he had become quite adept at maneuvering his bike through the debris-choked streets of London, often able to "jump" the smaller bomb craters by pulling up on the handlebars and pedaling for all he was worth.

Most young men, slightly older than Peter, had joined the army by the early forties, and firefighters needed support. Toward this end, the National Fire Service (NFS) was created in August 1941, an amalgamation of the War time National Auxiliary Fire Service and the local authority fire brigades. Likewise, the Air Raid Precaution (ARP) comprising a number of organizations, was instituted in 1937 to protect civilians from the danger of air raids. ARP volunteers included wardens, messengers, ambulance drivers, rescue parties, and liaison with police and fire brigades.

My friend Colin Kirsch, creator of the onlinebicyclemuseum in England, describes the role of the ARP Warden: “In the Blitz the warden was to be the eyes and ears of the local Civil Defence Control Centres, patrolling the streets and controlling ‘incidents,’ the bureaucratic euphemism invented to describe every sort of disaster inflicted on the civilian population by an air raid. It was the Warden’s report of an ‘incident’ that set the Civil Defence mechanism in motion, summoning stretcher parties, fire engines, heavy rescue units and mobile canteens—all the services required to care for the injured, comfort the survivors and dispose of the dead.

A corps of ARP volunteers…(were comprised of) Air Raid Wardens, Observers (Plane Spotters), Fire Watchers, Rescue Workers, Messengers…An ARP Bicycle Messenger had to ride his bike to the local ARP Wardens post after an air raid ‘all-clear’ siren had sounded in order to deliver messages to other posts and Civil Defence control as directed by the Wardens. That could be tricky—the all-clear siren was sometimes presumptuous—and Bicycle Messengers were sometimes killed in air-raids…”

In honor of my friend, Peter Franklin-White, I have built two British bicycles as they might have appeared during World War II. The first is a 1930s Hercules, as ridden by a member of England's National Fire Service; the second is a 1940 Humber, outfitted as an ARP Messenger’s bicycle.

When I found these bikes many years ago, both machines retained their original "War Grade" Dunlop tires (since replaced in order to make the bikes rideable). I have added authentic Lucas "Masklite" lamps to each bicycle, conforming to World War II blackout regulations. On the Humber's rear rack you will see a NFS Fire Brigade axe marked "Chillington/Arpax," a tool used by first responders to clear paths and free people from the rubble. (Note the rubber handle to prevent electrocution should one strike a live wire). The blue helmet is marked “NFS,” denoting a member of the fire brigade; the ARP helmet belongs to the Messenger. The tool bag hanging from the Hercules' top tube is a 1941 Brooks.

Seven thousand of the combined forces of the NFS, ARP, and other Civil Defence workers were killed during the war. 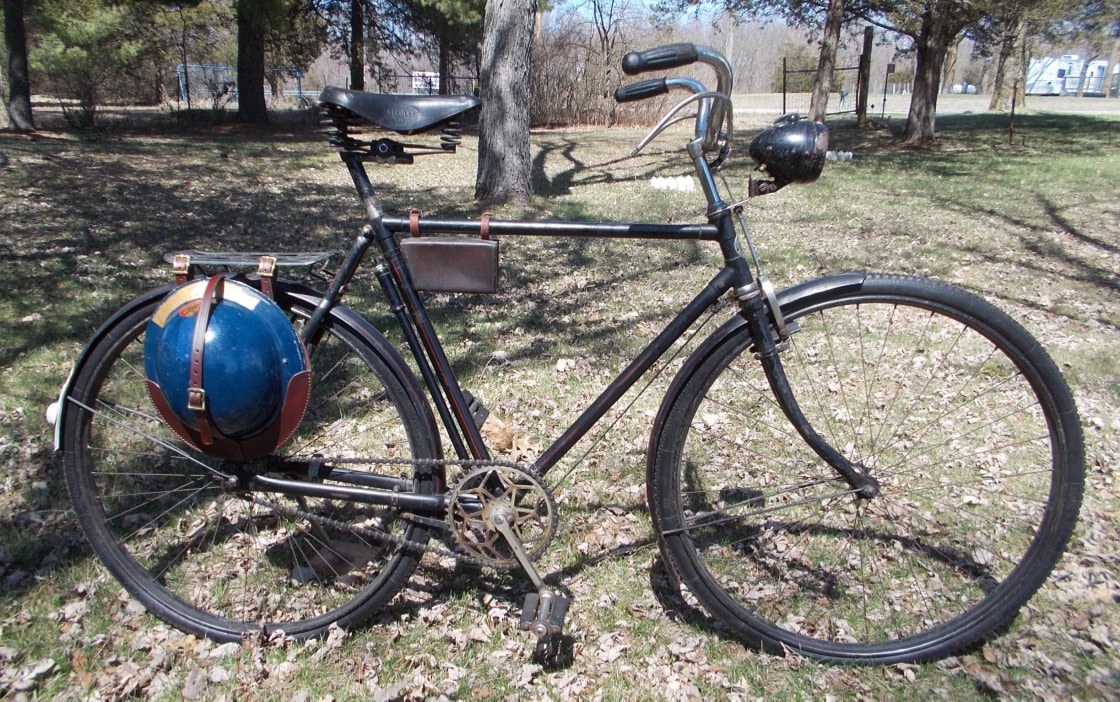 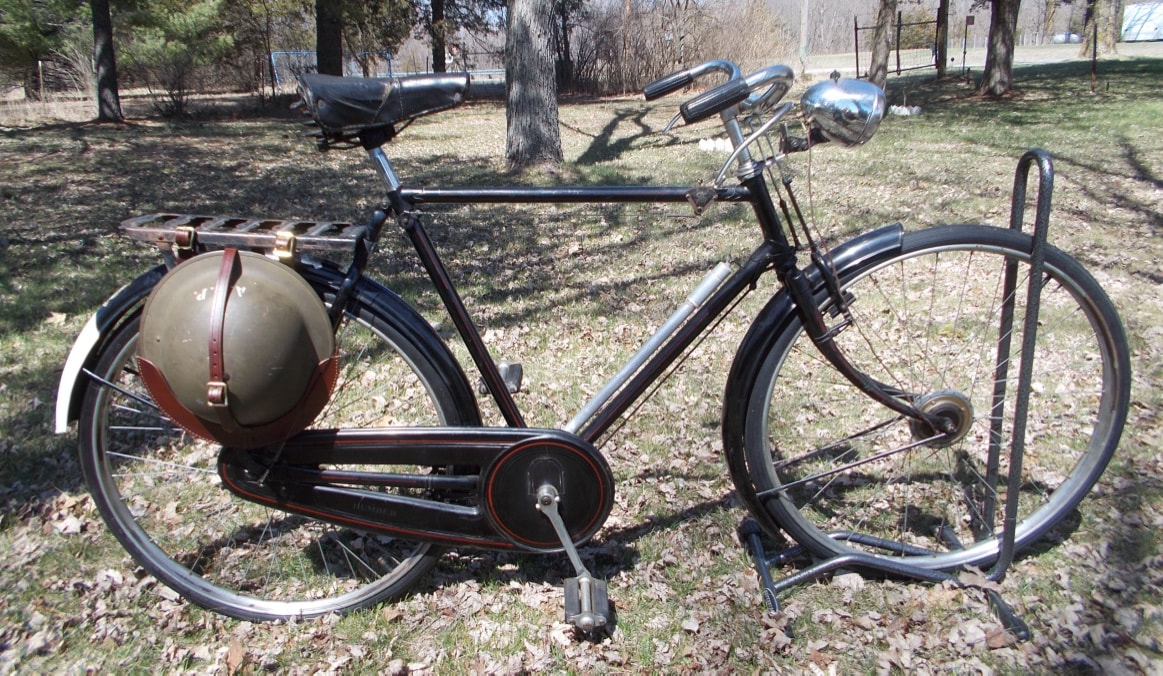 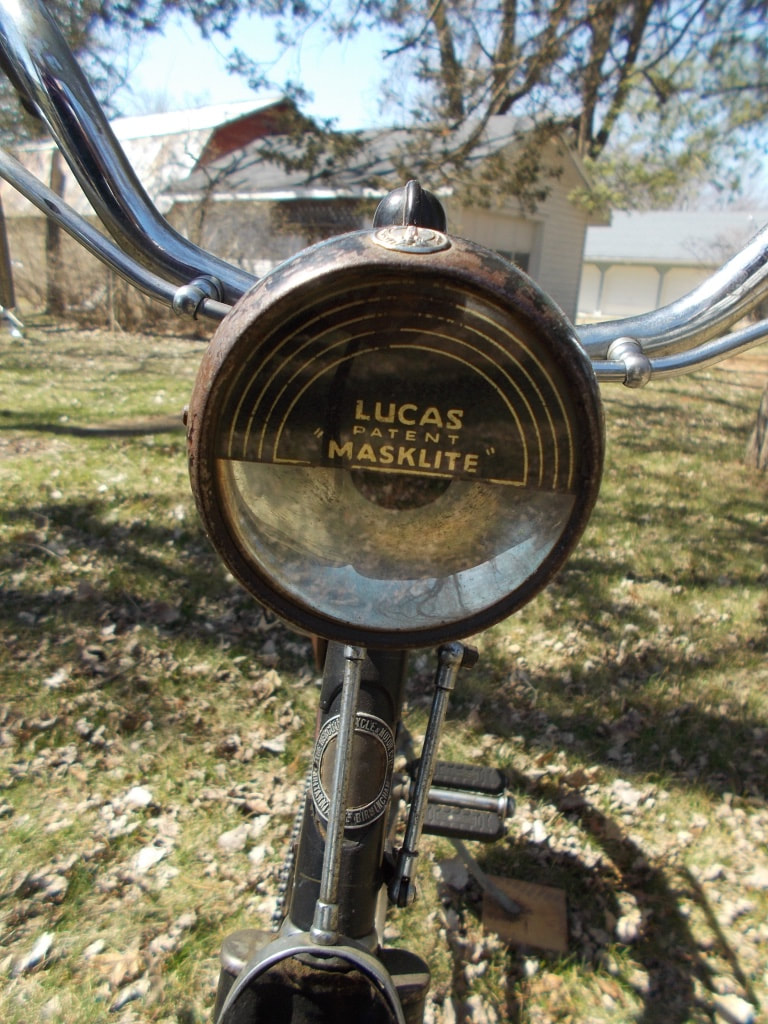 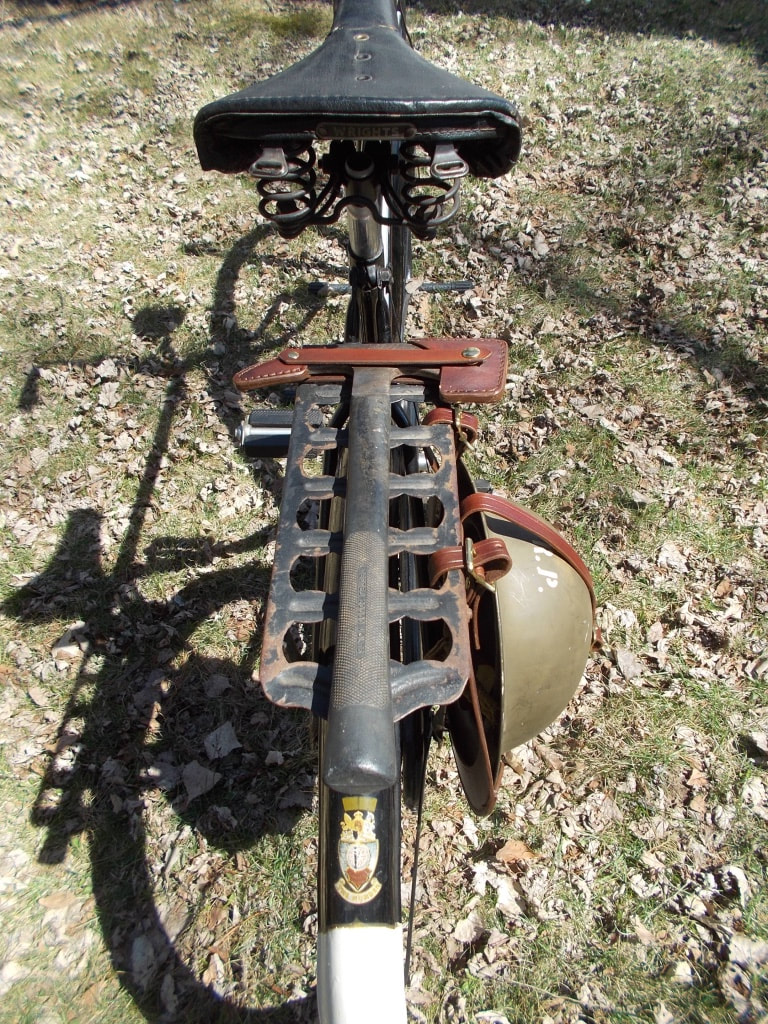 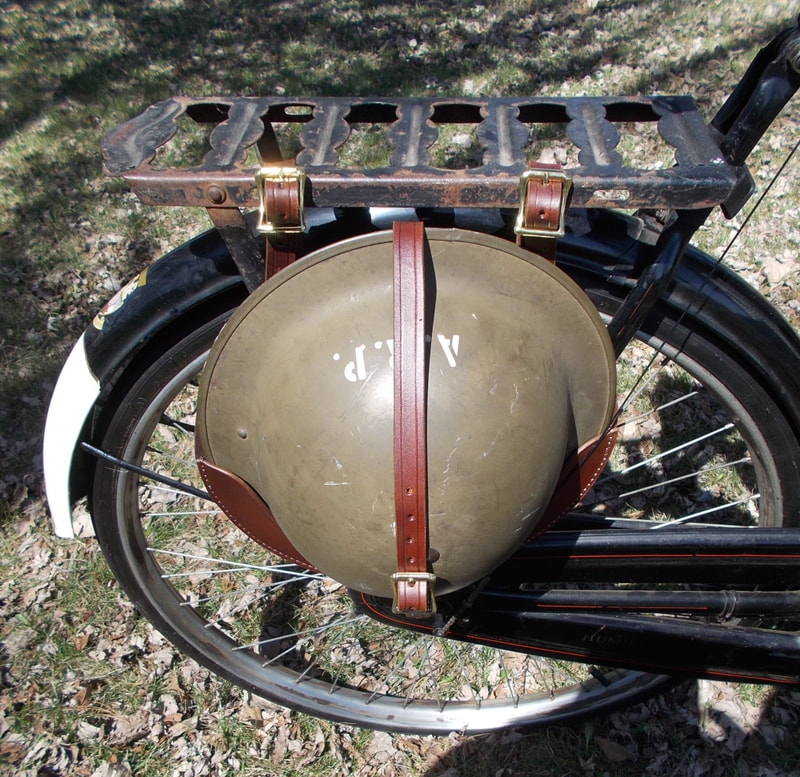 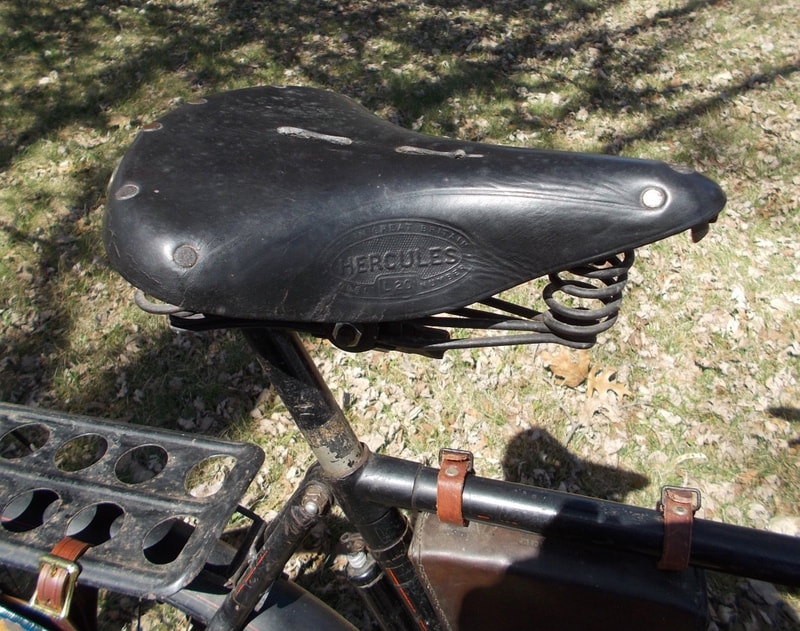 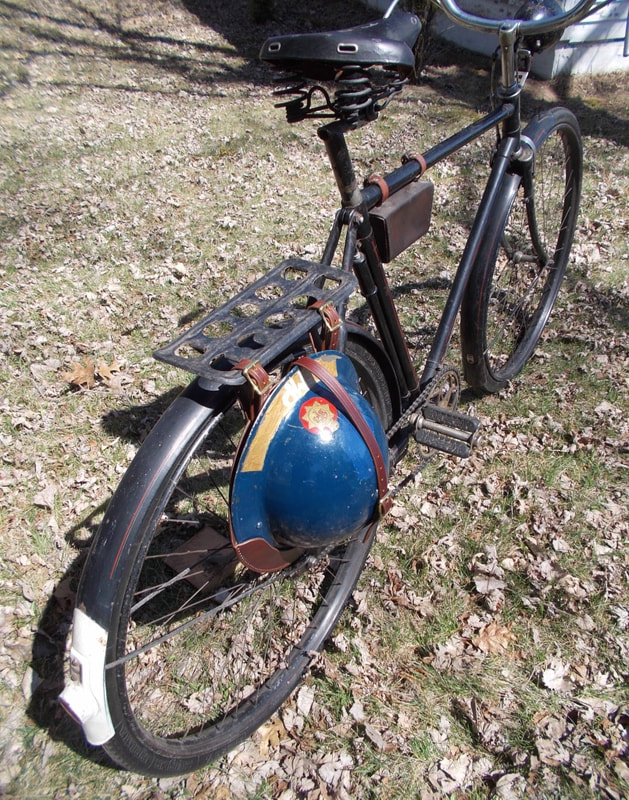 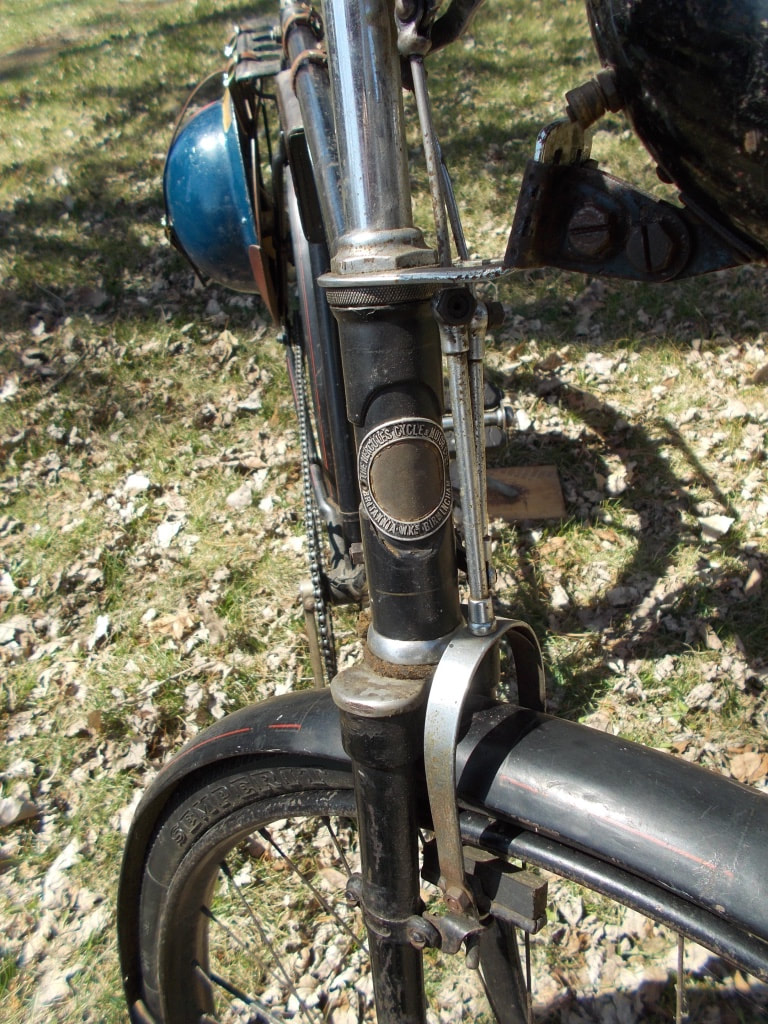